What is a quarantine period, why is it needed, and when is it necessary?

A quarantine period is when you purchase / adopt / rescue a new chinchilla, but want to be responsible with their health and the health of your current pets. Since chinchillas do a fantastic job hiding illness and injuries from  their owners taking the time for a  quarantine process gives you the chance to access your pet, their state of health, and allows you both to settle in. It's stressful to be moved to a new home, so in addition to making sure everyone is healthy, this period gives the new pet time to relax.

When don't I need to quarantine?

That's all there is to it! It's pretty simple when you take the time and and have patients.

When a female has been exposed to a male, it's important to assume she may be pregnant and put her on a pregnancy watch.
This is so you know whether or not she safely delivers her kits. A pregnancy watch lasts for roughly 4 months.

Let's say you have just adopted / purchased a mixed sex pair as pets. You should immediately separate the male and female from each other. Even if you don't intend on breeding, a male and female pair will almost always mate and reproduce. It's their nature, and as the owner it's your responsibility to prevent that. Having a male and female together is creating a breeding situation, making you a breeder. If you have just a female, but know or suspect she has been exposed to a male you should still put her on a PW.
A little information on Pregnant Chinchillas: The chinchilla's gestation is approx 111-120 days and during this time the mother should not have play time or be handled. Baby Chinchillas are called "Kits". Kits are born fully furred, with open eyes and are mobile.

The next step would be to insure that the female chinchilla is properly housed and cared for during this time.

A pregnancy safe cage would be a smaller cage, no bigger than 24" tall, and 24" wide ( that is being generous ) to prevent the mother and kits of falls from the top of the cage.

​The cage should also have a bar spacing no bigger than 1/2". Anything larger kits will be able to escape from. That is very dangerous as they can fall to the floor and become injured. Being separated from the mother means they will not have warmth, or be fed. This also exposes them to other risks like getting lost in the household or being exposed to other pets in your home.

​While you have the female on her pregnancy watch, it would be beneficial to give her a handful of alfalfa hay in addition to timothy hay and quality pellets. Alfalfa helps the production of milk, and will help the mother regain some lost nutrients the kits have taken from her during their development.

Keep an eye on her eating, drinking, sleeping, and weight. Near the end of her pregnancy you will notice a weight gain, and she may start sleeping on her side more frequently.
​ 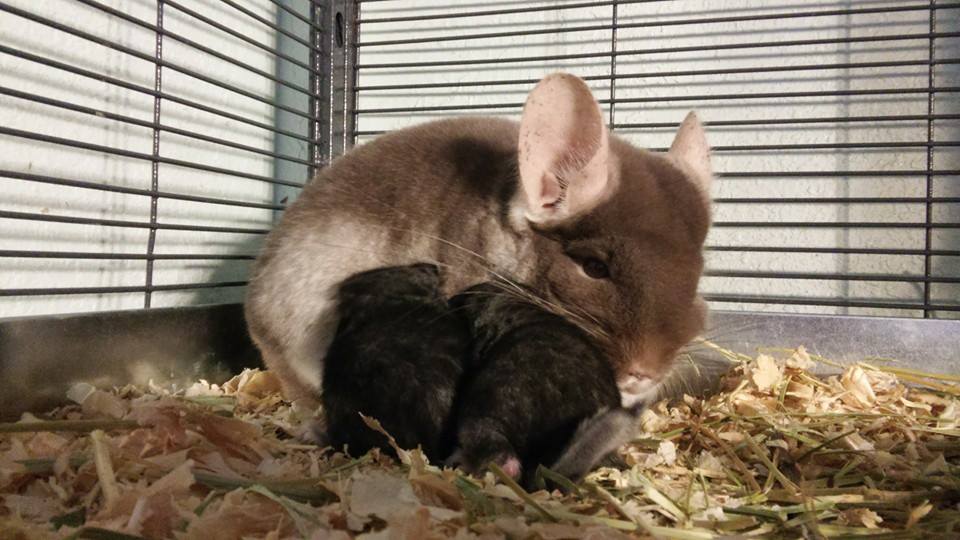 Friendly tip: Keep the cage simple before and after kits are born. No high ledges, no wheels, no hay or pellet feeders they can climb into. These items are know to cause injury & death with kits.
​
FAQ:

Will the chinchillas become depressed when separated?
- No, they may make calling sounds to communicate, sit in a corner, or sleep a little more but eventually they will adjust to being separated. It's important not to project human emotion onto our pets, that is called anthropomorphism.

Will I know if the female is pregnant before she delivers?
- Maybe. This depends on the animal. Is she healthy? Is it her first litter? Large litter vs. Small litter. Some good signs are eating and drinking substantially more, then stopping and sleeping on their sides more frequently. The abdomen will be firm * please don't squeeze it * and the nipples will be elongated and a reddish color. The best way to tell is to let her belly gently rest on your hand and if she is one month or less from delivery, you will feel babies kicking and rolling in the belly. Don't poke or push, just let her belly rest on your hand when you're holding her.

Why does the male have to be removed?
- Males need to be removed because females can become pregnant again any time they go into heat during their current pregnancy. Females have to uterus horns. When a double pregnancy occurs the later-younger litter if forcefully aborted during the delivery of the full term pregnancy. The premature kits seldom survive, and the mothers take extra strain and stress holding to pregnancies at once. Females can also become pregnant immediately after giving birth, and males are known to trample new born kits in efforts to breed with the female again,

You CAN reintroduce the male if he has been neutered and separated for 6 week post castration.